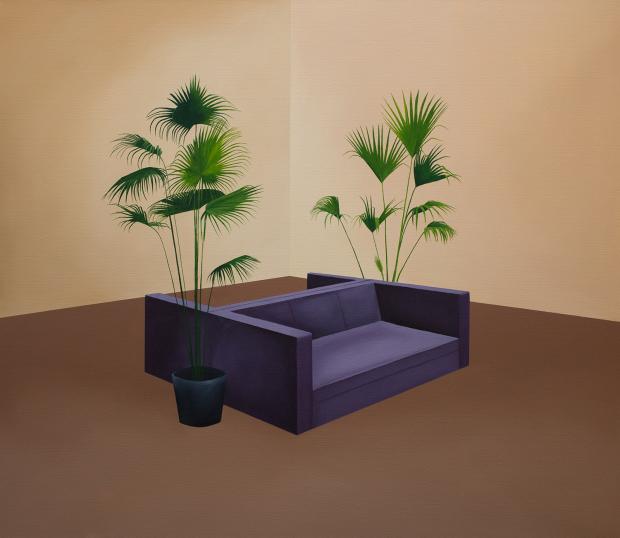 Palm Down by Stephanie Wilson.

FILED UNDER Exhibition POSTED BY Lucy

The “Great Australian Dream” is a national reverie from which we have not entirely awoken. At its most vivid in the post war 1950s and 1960s it flourished in a time of full employment, burgeoning wealth and the urban sprawl or sub-urbanisation of Australian cities. Central to the nation’s aspiration was the idea that success and security could be measured through the ownership of a quarter acre block and detached house with garden, barbecue, hills hoist and later, from the 1970s, a swimming pool. Artists, writers and film-makers, however, were suspicious, and the dream was ridiculed and parodied in paintings of John Brack, Nino Culotta’s They’re a Weird Mob (1957) and Robyn Boyd’s critique of Australian architecture, The Australian Ugliness (1960). Howard Arkley (1951-1999), perhaps the most enthusiastic creator of suburban iconography, occupied a period between “the dream” and its imminent demise. If Arkley’s work was at all critical, his critique was tempered by ambivalence; occasional disdain but mostly nostalgia and romance.

Today, rising house prices, urban planning, the effects of immigration on demographics and culture, have placed significant strains on the Australian dream. Thoroughly modern, focuses on art and design in a post-dream era, where artists engage with an Australian psychological landscape, employing urban architecture, its interiors and materials to examine the residues of a dream that may have gathered strength through unattainability. Where artists of the 20th century produced views of an extant phenomenon, contemporary artists reflect upon the aesthetics of what was and consider what might have been with work that is eloquently distanced from its original subject matter. “Thoroughly Modern” explores a world after Arkley – of modernist illusion where dream dissolves into a fantasy framed by harsh (economic) realities.