Melbourne photographer Emma Phillips’  body of landscape images is so striking in its minimalism that it almost borders on abstraction. Shot amid the dramatic man-made undulations of a salt mine –  huge, white mounds of glistening salt. It’s a familiar form, but an alien landscape. Phillips also traces fragments of industrial and domestic infrastructure within this strange environment. Phillips has used salt as an allegory – reduced and economised – for the Australian interior. A series of images by Spanish photographer Aleix Plademunt. Via his striking monochrome photographs, Plademunt explores the theme of physical distance. The images have been carefully arranged to tell the story of a journey, which begins by Plademunt exploring his inner self through photographs of his own red blood cells, images of his father when he was young, before going on to capture vast landscapes and naturally occurring phenomena. 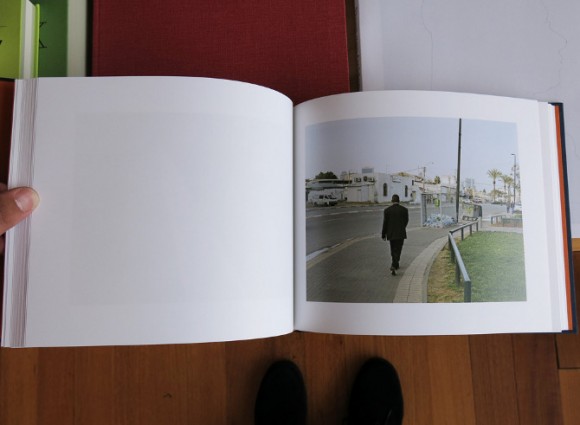 New York-based photographer J. Carrier’s debut book traces the lives, movements, surfaces and situations experienced by West African immigrants in Tel Aviv and Jerusalem. Loose and poetic in cadence and style, this collection of photographs is equally incisive and elusive, giving hints and traces of the paths trodden by the displaced. Slovakian photographer Martin Kollar’s images from Israel occupy an elusive space. In some cases resembling still lives or other premeditated situations and arrangements, these documentary photographs poetically describe both the mundane and surreal realities of life in Israel. One key resonance is that of psychological weight. It is no mistake that in his artist statement for ‘Field Trip’, Kollar makes a comparison between the tensions his childhood growing up behind the Iron Curtain in the former Czechoslovakia and the day-to-day realities of life in contemporary Israel. A comprehensive overview of Italian photographer Guido Guidi’s oeuvre, which has spanned the best part of half a century. A pioneer of Italian landscape photography, Guidi was one of the first photographers to redefine the concept of the landscape in the aftermath of World War II.

Oh look at that