Writer, editor and curator Karen McCartney has definitely been on your coffee table at some point in your life. The history of art and English graduate, who now lives in a Bruce Rickard house in northern Sydney’s Clontarf, first wrote for the British mag ‘Art Monthly’ and the splendid ‘The World of Interiors‘ before going on to be the founding editor of ‘Inside Out‘ in 2000. Other notches on her belt include being a guest curator for Sydney Living Museums, and the driving force behind five very heavy books including the two widely read ‘Iconic Australian Houses‘.

‘Perfect Imperfect‘, the latest book Karen has worked on with Sharyn Cairns and Glen Proebstel shows how great decay, imperfection, darkness, nature and ugliness are. Across its 300 or so pages, they have chosen people and projects from all over the world (Hotel Hotel, and our own Nectar Efkarpidis and Don Cameron included) that celebrate craft, process and old stuff in a radical forward-thinking way.

On a recent Sydney morning Karen talked to us more about the book, which will be launched along with an accompanying exhibition at Hotel Hotel’s Nishi Gallery at the end of the month. Karen ordered coffee and toast and was incredibly smart.

The book ‘Perfect Imperfect’ relies entirely on people and their places. What was your process for finding these stories?

Well Glen is in New York and Sharyn is in Melbourne and travels a lot so the old editor in me came out and said: “We all need a list of words and phrases that we can have in our head so that if we find things, they don’t have to tick all the boxes, but they need to have the essence of what we’re talking about.”

At first we (Glen, Karen and Sharyn) were drawn to a visual expression of these people’s aesthetic but as I began to interview them and go and visit their places they almost over delivered back to me. Somebody would say, “I like to get so absorbed in my work that accidents can happen and I can fold them in.” So this whole idea of imperfection, failure and process became a big thing. I think it was one of the ceramicists (in the book) who said, “You’re committing your work to fire. Of course you’ve got to be relaxed with what the outcome is.”

Boom! Karen says artist Adam Železný’s use of explosives and clay is emblematic of the idea of imperfection and process. Adam’s work is photographed in 'Perfect Imperfect'.

You’ve had a long career in design books and magazines. Why ‘Perfect Imperfect’ now? Could you have done it 10 years ago?

It’s funny, I think some things come to a point where they are the sum of your experience. I am particularly proud of this book and how we all worked together to produce it.

You reach a stage where you’re not second guessing. Books are funny. Other areas of your working life you can kind of compromise but with books, because you feel so passionate about them, you go: “No, it has to be this way.”

You talk about decay in the book. British artist Grayson Perry has talked about the aesthetic of decay being a particular taste of the upper class. What do you think about that?

Well when you think of the traditional English upper class they have those corduroy jackets with patches on the arms. It’s that sort of thing where your value isn’t defined by having the latest thing. Your value is almost a given because you’ve had generations of inherited wealth. It’s a confidence in a way that comes from the knowledge that nobody is going to think you’re poor. So their (the upper class’s) value system, because they’re confident, is different.

One thing I got really interested in was this idea of the mend and why we don’t mend things. I’ve got all these sweaters that have been eaten by moths and I was thinking that maybe I should mend them with bright blue thread and celebrate the mend rather than be ashamed of it.

What do you hope people will get from the book?

I think it offers a philosophy that extends beyond design. It’s about letting go, and letting things come to you. You know, Nectar said a good thing about mess to me; he said mess allows people something to hook onto. And I think of perfection in people; perfect people, you’re just not that drawn to them. Something that’s less controlled, whether it’s a person or object, it allows you to have a connection.

You started Inside Out magazine many years ago. You’ve just started a new business called ‘e’dited‘. How does it feel starting something new again?

It’s so funny, that thing of having been an editor, and then I took these other roles at News Corp where I was Editorial Director and then I got this really grand title of Lifestyle Director across the whole newspaper and magazine group. And dealing at that management level I sort of learnt then that I had a yearning to do something more creative. Being an editor is fun, it’s a good job, but… when I started doing my own projects I realised that I really enjoyed that feeling of making things happen. I don’t want to be in a “job” again.

The ‘Perfect Imperfect’ book and exhibition will launch at Nishi Gallery on Wednesday April 27 at 6PM and run until Monday May 8. For the show, Karen, Sharyn, Glen and Hotel Hotel have pulled together perfectly imperfect objects from around the world including sculptures from Julian Watts and Nectar Efkarpidis, photography from Don Cameron and ceramics by Alana Wilson. 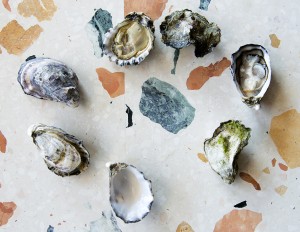