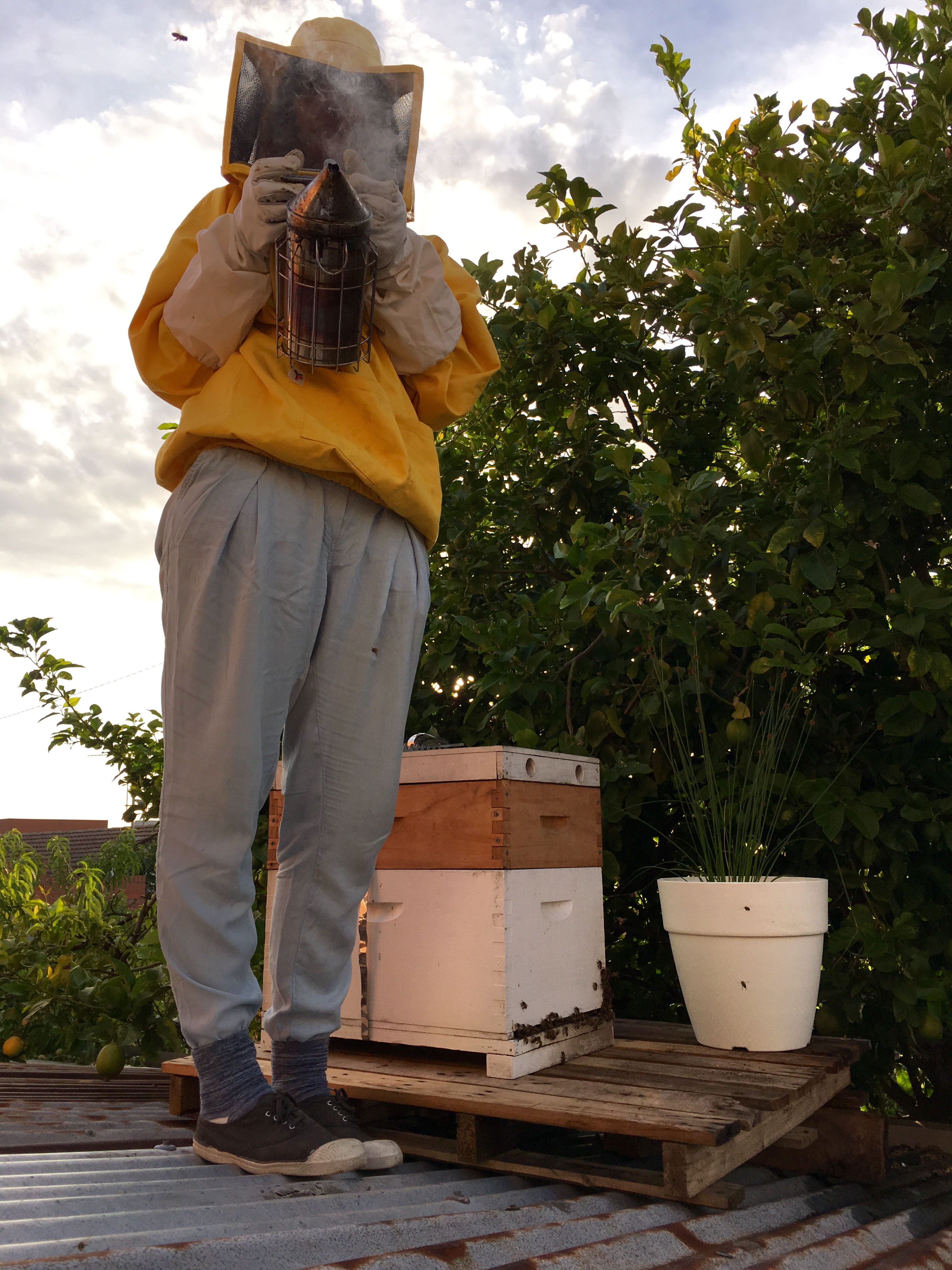 Steph working the smoker at the Mankoushe hive in Melbourne

On a wall in the ancient Egyptian Tomb of Rekhmire, now 3500 years old, is a rendering of two beekeepers working a stack of cylindrical, clay hives. One is kneeling before the apiary, removing pieces of honeycomb, stacking them in bowls. Our second beekeeper stands above him, with three curls of smoke rising from the bowl cupped in his hand – he is smoking the bees.

In the Melbourne suburb of Richmond, just last year, I met a taxi driver. His name was Aziz. He told me that as a young man in Sudan he kept bees in trees – in cylindrical hives suspended from the branches of his favourite beekeeping tree, the African Mahogany (Khaya senegalensis). He’d wrap himself in layers of clothes and plastic bags as a defense against stings, throw a rope up into the tree’s branches, scamper on up there and rob some honey. But before he did any of that he’d light a fire below the hives – to smoke the bees.

Of all the kit we beekeepers drag around to hive inspections – suits, jackets, veils; hive tools; gauntlet gloves; bee brushes – the smoker is my best friend. It calms the bees and, in a strange way, it calms me too. Lighting the smoker marks that moment when we beekeepers transition from thinking about chores and emails and bills to entering the realm of the honeybee super organism. Lighting the smoker concentrates the mind; it brings the moment into focus and, for me at least, triggers a systems check – what is the wind doing? (Which way does the smoke blow?). And where in that big, blue sky above is the sun? I want it behind me, shining down over my shoulder, so when I’m looking at those frames every bee, every glistening larva, every tiny egg sitting at the bottom of every cell – is lit up by crisp, bright, sunshine.

Smoke is a super complex chemical cocktail that, as far as beekeepers are concerned, has two very important effects on bees. For starters, these smoky compounds mask the alarm pheromone that is released when a bee stings or is accidentally crushed during an inspection. Smoke helps reduce an aggressive response from other bees to that alarm pheromone – which is nice for the beekeeper (because it means no or fewer stings) and nice for the bees (that would otherwise die if they stung the honey robber).

The second effect smoke has is that it triggers a feeding response in the bees – the bees think the roof is on fire and load up on their most precious commodity – honey – in case they need to evacuate the building. Beekeepers see this every time they smoke bees – their little bums stick out of the honeycomb cells as their heads are deep down in there, gorging on the good stuff. Once their bellies are full of honey it’s also physically harder for them to pull off the acrobatic moves required to sting – have you ever tried to do a yoga class after a Christmas feast? You could if you wanted to but, you know, it’s harder with an engorged stomach (I don’t actually do yoga… But I’d like to).

Every beekeeper has a preferred fuel for their smoker. I used to gather pine needles from the rust-coloured carpets of them under grand old conifers in Victoria’s Otway Ranges (the site of my first apiary). They smelt pretty good smouldering away. But when I moved my hives onto the rooftops and backyards of Melbourne’s inner and northern suburbs I couldn’t forage for pine needles like I used to. So I switched to the bark from paperbark trees, especially the prickly leaf paperbark, or tea tree (Melaleuca styphelioides). This bark burns cool and produces a wonderfully aromatic, thick, white smoke. Paperbarks are peppered throughout the city forest, which makes foraging for smoker fuel pretty easy. At any of my apiaries I can tell you exactly where the nearest paperbark is. Insect pollinators love the flowers of the paperbark too – trees literally hum with bees in summer when the Melaleuca is in bloom. I like the poetry of that: smoking the bees with bark from the tree that the bees have fed on, that the honey I’m robbing has been produced from.

That knowledge makes for an even more meaningful ritual – a very tidy little network of connections (and it makes my car – my fingers, my hair – smell amazing for hours afterwards. My personal incense, a signature scent).

So that’s my little story on the ritual of smoking the bees. Whether we beekeepers realise it or not, smoking the bees is an older-than-old custom that connects us with an ancient tradition spanning time and place. Every time I light my smoker I am plugging into a continuum of ceremony that has echoed down through generations of beekeepers the world over. It’s nothing fancy. It’s low-fi, simple, elemental stuff. We light a fire, smoke the bees, rob honey, and eat honey.

Honeyfingers is hosting a Swarm trap making workshop as part of our Fix and Make program. If you want to get your hands dirty press this. 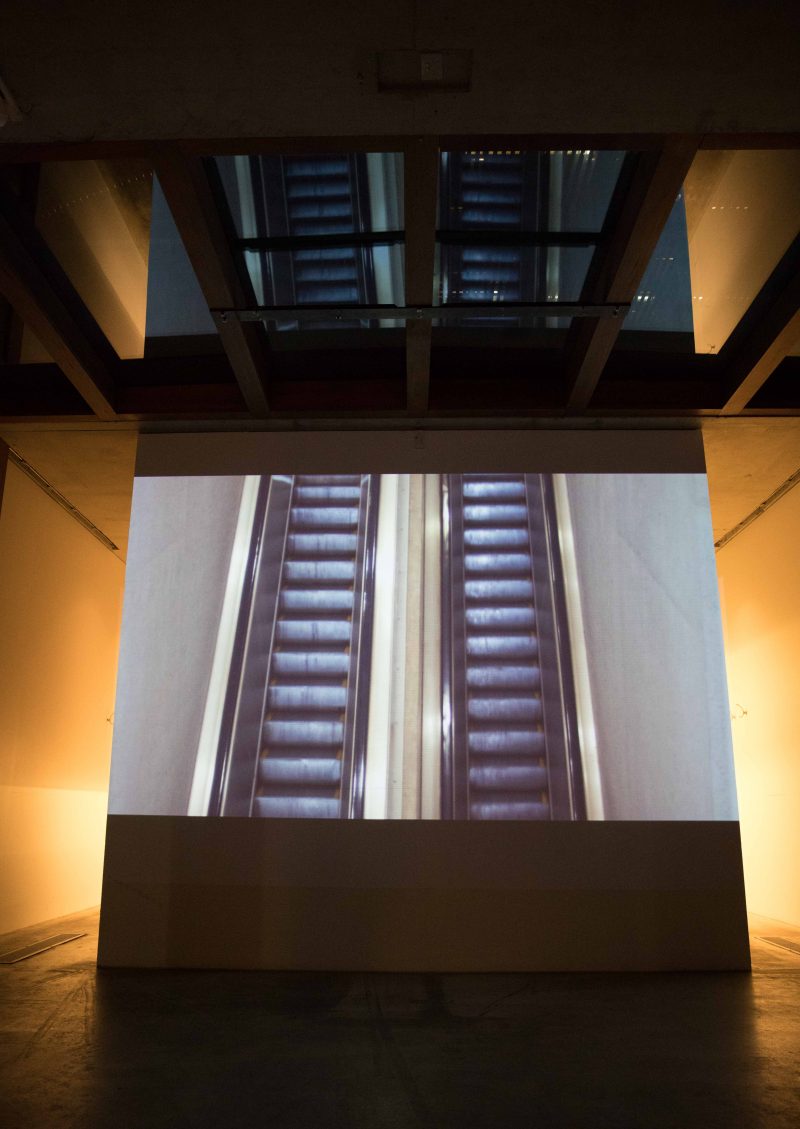