‘Swarm Trap’ was an exhibition curated by MANY MANY and Honey Fingers. Together, we presented it at the Nishi Gallery, here in Canberra, back in June.

The exhibition was a collection of swarm traps (safe houses for bees) made by artists, designers and makers in their mutual admiration for the clever and generous animal that is the bee.

Today, now that Spring has finally arrived, these swarm traps are heading off to be installed in city, suburb and bush sites between here and Melbourne.

We’re waving them goodbye and blessing them all in the hope that they all prove to be a comfy safe house for bees looking for a new home. 'Negative (Bee) Space' by MANY MANY. Shot by Charlie White. 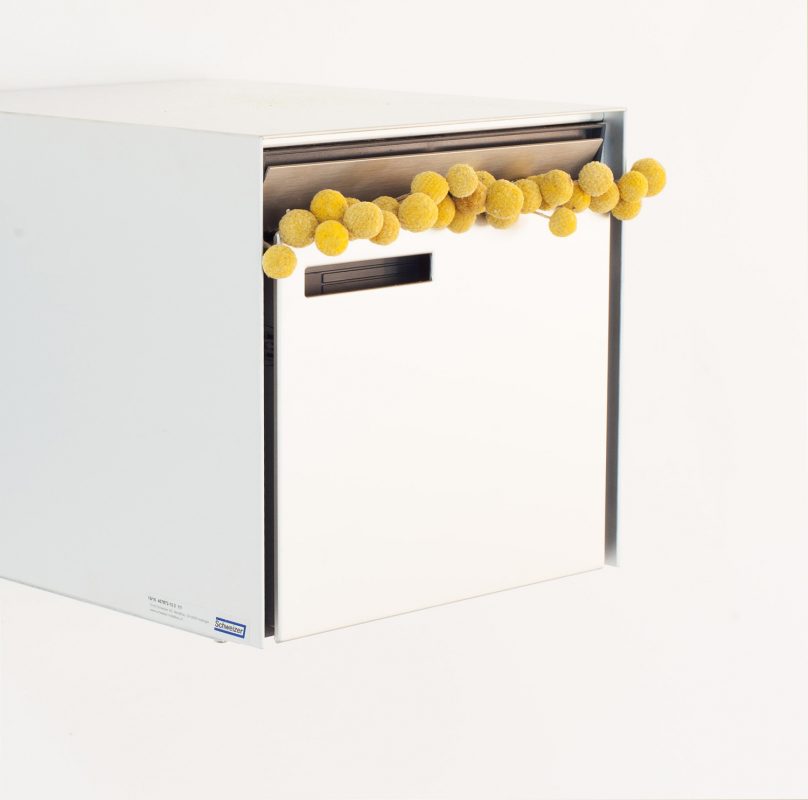 'A Foreign Object From an Alien World, To Tempt the Curious Bee' by Nicholas Ashby. Shot by Charlie White. Born out of a child-like playfulness through which Madeleine Mills like to engage with material, this trap is a fusion of form and duty of care. Designed as a space that is safe, satiating and alluring for the bees, the attention to detail is at once acute and, in effect, unselfconscious. The layers of material have been built upon slowly and often spontaneously – its stoicism and autonomy revealing itself through the process. The trap stares back through the canopy of both uncanny and natural substances, ornamenting and embodying a sense of composite corporeality in our own human fabric.

‘Bees in Trees’ by Honey Fingers and carpenter René Mancuso.

Built to the 5000 year-old dimensions of the (still in-use) clay, cylindrical beehives of Egypt, ‘Bees in Trees’ is a nod to the traditions of beekeeping on the African continent, where empty cylindrical hives are suspended in trees to catch swarms and left in-situ, or moved to ground level, for the beekeeper to rob during the season. This hive will have an internal divider board (much like a Kenyan top bar hive) that will create an initial volume of 40L for a swarm to inhabit, but can be moved to create a larger volume for a growing colony to occupy. It will also have removable circular frames. This hive will be moved to ground level once bees have moved in. Interestingly, the volume of this hive – developed 5000 years ago – is equal to the volume of three eight-frame Langstroth boxes used today (a typical hive set-up in spring being two brood chambers + one honey super = three boxes).

For the on-the-move trapper. Ben Blakebrough’s mother used to have a swarm trap just like this one! Marcel Duchamp had one too, so did Albert Camus and Alan Ginsberg – he would read poetry to the swarm before attempting capture.

Field Experiments have made an ad hoc swarm trap from everyday found objects. The bung on a 60 litre plastic fermenter drum has been removed, providing the entry point for the bees. The drum hanging height is controlled by pulley system which can be adjusted to suit any environment. This trap is a reminder that we can work with items on hand to create new objects that fulfil a specific purpose.

Beci Orpin’s swarm trap is based on the naturally occurring shape of honeycomb – hexagon. She used lots of blue and yellow paint as these are the colours bees are most attracted to in nature. Beci hopes bees will think it’s a weird flower and fly right in. The swarm trap was designed and painted by Beci and constructed by James Reynolds.

‘Negative (Bee) Space’ by MANY MANY.

A common DIY swarm trap is made out of pressed fibre moulded by conjoined plastic buckets. MANY MANY sought to emphasise this traditional form by casting its negative space in plaster. The two halves – a plaster tower when closed – each have a different internal texture, creating a special interior ‘for the bees’ eyes only’.

A catcher rather than a trap, this device is popular in Europe for catching and relocating swarms that are within – or just out of – reach. The swarm can be closed inside the material funnel, and then gently shaken into a hive through the bottom of the funnel.

‘A Foreign Object From an Alien World, To Tempt the Curious Bee’ by Nicholas Ashby.

It’s not just that this perfectly refined design by the Swiss artist and designer Andreas Christen (1936-2006) is produced and finished to such beautiful exacting standards – the adoption of this classic by seemingly the entire Swiss population represents an acknowledgement that the question of how to receive mail is answered. Similarly, Nicholas Ashby believes our animal brothers and sisters are capable of a taste and appreciation for refined and utopian human-built technology. And that the question of artificially housing our bees should not be overthought with a muddle of archaic research from our own history.

Bees would be eager to move from the craft-driven nostalgic timber we usually build for them to a clean and reduced modern future. A system driven by rational standardisation and the total absence of individuality. An efficient and ever-expandable program for mass housing, leaving one free to create and dream beyond the immediate distraction of home and one’s heritage.

Humans and animals live together in the one kingdom – we need to share our riches.

Bees naturally swarm to a hollow tree branch to create a new hive. This ceramic replica of a dead limb creates a reusable vessel that the bees will recognise instinctively as a new home.

Through their research, SIBLING became most interested in two things: that, in the wild, bees are most attracted to blue and purple followers; and that bees communicate to one another about their environment through dance. This led them to create a trap with a mirrored surface, with purple attractors. As the swarm trap hung outside the window of their fourth floor Melbourne CBD office, they watched as the box reflected both its environment and the bees themselves as they approached and danced across and around the surface.

Constructed from the original bathroom floorboards salvaged from works on architect Robin Boyd’s ‘Lawrence House’ (1966-68) in Kew, Melbourne – and installed on that building’s garden wall for two years – ‘Big Roof’ is a play on taking the inside out and is a stab at creating a haughty, small-scale architectural monument, for bees. The trap itself is a box built to Prof. Thomas D. Seeley’s specifications with a big, hinged roof (the bees cannot access the roof’s void). It has caught one swarm that now lives in Carlton.

‘Pat’ by Charlie Lawler and Wona Bae of Loose Leaf.

Charlie and Wona use natural materials to create both permanent and temporary artworks. Their swarm trap is inspired by the German ‘Sun Hive’ design. The suspended structure is created using tatami weaving techniques with cork branches. The hive is created in two sections and is designed to hang from a tree. The upper level contains a large chamber for the colony to gather in. At the base of the chamber is a round opening for bees to enter and exit. The lower level of the hive partially plugs the opening, giving the hive more protection, and provides a comfortable landing strip for the bees to enter the hive from any direction.

Of love and other things 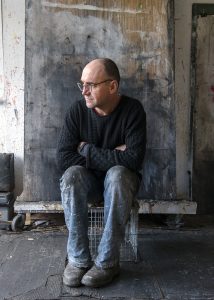