This article originally appeared on Assemble Papers. Here. Thanks AP for letting us steal your stories sometimes.

Words and images by Judy Natal.

From geothermal tourist sites in Iceland to the so-called failed experiment of Biosphere 2, the world in Chicago-based photographer Judy Natal’s ‘Future Perfect’ series explores the ever-changing landscapes of Earth and our relationships to them, as humans entangled in a global ecological framework. Here, she describes how she created her vision of the future from fragments of a very real present.

‘Future Perfect’ is an exercise in travelling backwards in time from the future. I wanted to show that the future could be bleak, but as you move through the photos, which start in 2040 and end up in 2010, I wanted people to understand that the Earth we have now is actually very beautiful and alive, and to preserve that we need to be better custodians of the land.

Moving through the decades backwards in time, the colour palette changes from very austere and monochromatic in 2040 as you move back towards 2010, when it starts warming up and the emotional tenor lifts – all of a sudden people are smiling. At the end, the photos are downright romantic.

The three sites you see in ‘Future Perfect’ are very disparate and their selection was very organic. It all started during the construction of the Springs Preserve in Las Vegas: I had been looking at the history of Las Vegas through its neon signage and I wanted to start looking at the Las Vegas of the future. At that time, Las Vegas was calling itself ‘The City of the Future’, which terrified me, but I was also very intrigued.

A few years later, a friend of mine was getting married in Tucson, Arizona, and as a wedding party we visited the Biosphere 2. I knew about the Biosphere 2 project – when I was younger I even wanted to be a ‘Biospherian’ – but in person it was even more impressive than I had imagined. It’s a Bucky Fuller-inspired, gleaming, glass iceberg in this pristine desert canyon and the first time I saw it I knew it was my next logical step from Las Vegas. I wrote to Biosphere 2 and asked if I could do a residency and, eventually, after more than six months, they agreed. In my mind, Biosphere 2 is a man-made wonder of the world. Towards the end of its run it got terrible press – it really had an awful reputation as a failed experiment. But to me, even a failed experiment is valuable because you can learn from it.

These landscapes alone I felt risked being dehumanising, which is why I pursued the portrait element of ‘Future Perfect’ – because people are so remarkable. The steam portraits, taken in Iceland, are these poetic snippets of humanity. There are real moments of uncertainty and fragility in these portraits.

Really, though, ‘Future Perfect’ is about no place. I’m interested in subverting the way we look at photographs; I want to displace the viewer, because it’s only when we’re displaced or uncomfortable that we’re forced to reach out and ask ourselves the meaning of things. Place for me is a canvas – a springboard to create these metaphoric acts of interpretations of the landscape and of the world as we know it.

I think some of the most powerful works of art are the ones that really want to enact change and shake the rafters, and I think you can do that without being dogmatic. I’m not wagging my finger at anyone in my work because I’m implicated along with everyone else – I drive a car, I fly in planes, I buy food wrapped in plastic – but I think my role as a photographer is to ask questions.

The project I’m working on now is about the weather. Recently I was speaking to a publisher about another work of mine, Another Storm is Coming (2016), which commemorates the 10-year anniversary of Hurricane Katrina. Flippantly, they said to me, ‘This is a local issue,’ and I had to respectfully disagree. These so-called ‘natural’ disasters are not local issues – they’re global issues. And the sooner we can think about them that way, the better our choices will be as we write the future now.”

Thanks to Judy Natal for generously sharing her ‘Future Perfect’ photo series with us. For more photographs and information on what Judy is up to, visit her website here. 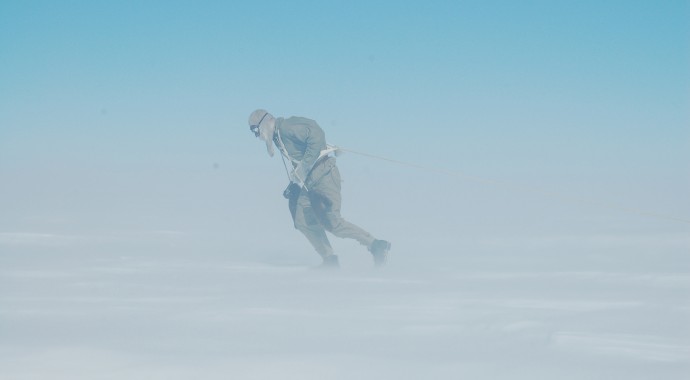 Meet Bob Earl of Oculus, a think tank/design studio/landscape architecture studio/lots of other things. In addition to all these hats Bob is a self-confessed chocolate slut from Queens.