The Future by Scottie Cameron

Words by Thomas Thwaites, image by Scottie Cameron. Read the last story in this series here.

When the lights flicker off, the noise of diesel generators spreads across the neighbourhood. You’ve actually got a little coal turbine out on the patio, so you get up from your table and, careful not to trip over anything in the living room, now lit only by the glow of your laptop screen and moonlight, and slide open the patio door. The turbine seems OK but these things take a while to get up to temperature, but when they do they’re pretty reliable.

Coal, back in the cities. A couple of generations ago it was everywhere and now it’s coming back.

Cheap and simple to extract you see. Not much complex integrated infrastructure required. Not so clean of course, but then you’ve got filters on your turbine. Not everyone bothers though. So if you’ve got a neighbour running without filters, well you’ve got to get a posse together and go round and make them see reason. Either that or don’t hang your washing outside when the grid power’s out.

Anyway, seems to be heating up OK, so back to work. You go back inside, sliding the door closed to block out some of the whining and throbbing from the various ad-hoc power ‘solutions’ and sit back down at the table.

You’re on the local mesh wifi, thankfully not much of which has dropped off, unlike the last time the power went out. You’re trying to hash out with some neighbours where to site this water tank you’re collaborating on. The water supply to your neighbourhood just isn’t as reliable as it once was, and so a few of you have got together to build a big concrete rainwater tank.

Things are more chaotic than they once were, but it’s not always a bad sort of chaos.

People don’t have as much wealth as they once did, there’s not so many high end luxuries around, but then there’s not so many rich people either. Sure, for us, well most in the old west actually, ‘The Great Levelling’ as it’s become known meant a decline, but for the many, well it was more of a rise. It’s hard to begrudge so…

‘Ping’, and the low voltage lights come on, casting their dim bluish light over the room.

It is a bit of a mess really… Not the sleek white cube it was twenty years ago that’s for sure. You tried to be neat, but your various ‘interventions’ have made their mark. You remember when you put the low voltage circuit in about five years ago, to tap in to the power from the building rooftop solar, such as it is. You tried to be neat about it, but the cable isn’t cheap, so you ended up doing some, erm, unconventional routing. You’re particularly amused by the bit of cable you stretched from the light switch on the wall directly to the ceiling light. It makes a good line to hang socks on though.

And then there are the pipes all over…

As well as the original water pipes in the walls, you’ve added your own community water circuit, and the grey water from the sinks and stuff doesn’t go down to the sewers now of course. And then there’s the back up sewer pipe to the community sump for when the municipal sewers stop working.

And the living room is more of a kitchen living room now really, since the original kitchen has gradually become your little business on the side – Gin distilling. You’ve got a good relationship with a farmer from the outskirts, an old friend of the family, who supplies you a reliable source of grain. People like what you make, but more importantly trust it, which is more than can be said for some of the imported stuff.

Since the food standards went bust, well you just don’t know what sort of stuff you’re getting, and maybe even what it’s been mixed with before it’s gotten to you.

Saying that, it’s probably time to get dinner started, before the rest of the household gets home.

Three generations, including you, under one roof.

Right what to make for dinner. Plenty of vegetables in the larder… And some of those insect dumplings the kids like… Some sort of dumpling casserole then. You rinse the dirt off some of the carrots and get chopping. It’s a funny thing, you can remember when local produce was a bit of premium product, for people with disposable income. Fresh from the fields that day, still with the dirt on and so on.

Now it’s the norm though. Everyone buys local because it’s cheaper…

It’s still expensive, but now there’s no cheaper option. Partly it’s because the infrastructure problems make shipping long distances much more difficult, especially when it comes to fresh stuff. And the exotic produce from other continents is much rarer too since the great levelling.

Still you can’t begrudge that someone on a coffee farm in Brazil the same standard of living as your mate on his farm on the outskirts of town. It’s just it’s made life a little bit less comfortable over here. Most went up, but the few came down in the levelling… And you were in the few. And though things have gone backwards in a lot of ways, well it’s not so bad. There’s less healthcare, but then people are a bit healthier. Allotments, vegetables, community… It goes a long way towards life. The future, well these days it is pretty evenly distributed, even if the bloody power goes out now and then…

Oh, that’s them at the door… 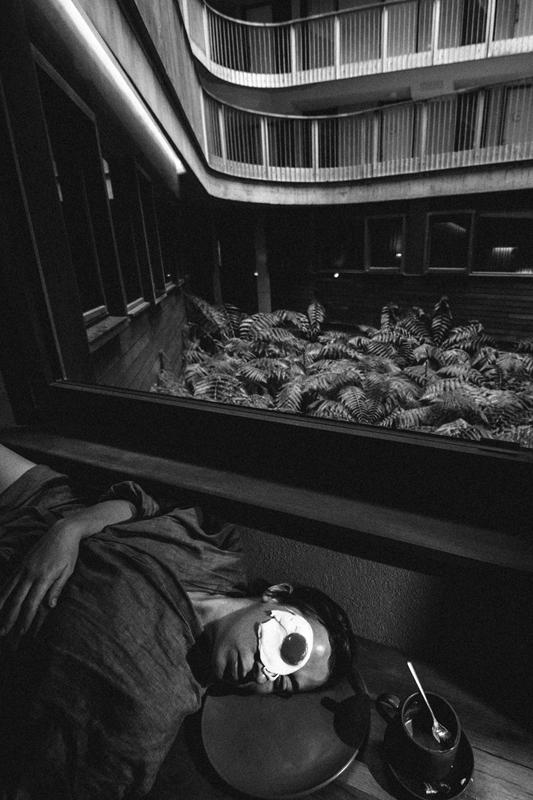