Don Cameron is the film director who helped co-create, design and curate the rooms at Hotel Hotel (alongside Nectar of Molonglo Group and Ken of Darlinghurst). Yes film director. This background may not be the obvious choice…The guy that directed Blur’s ‘Music is My Radar’, Garbage’s ‘Androgyny’ (ouah love that one) and the Pet Shop Boys’ ‘Minimal’ music videos…but to us it makes total sense.

In a film Don is always looking at how images convey an emotion; which is exactly the same as for a hotel, the only difference being that it has to last. Don sees rooms as a set with props that are there to engage the guest to create their own narrative of rest and introspection. He sees the items that make up the interiors as unique characters that you interact with and that have a past; many of the pieces are vintage pieces that have been reupholstered and at times repurposed. The chairs are mostly 20th century Australian pieces that have been sitting in Ken’s warehouse for the past 30 years, waiting for their cameo appearance. The in-room fittings (the bed heads, banquettes, wardrobe…) have been rebirthed from 200 year old oak reclaimed from granaries in the Loire Valley in France that made their way to Australia at the beginning of the 1900s.

Staging for a meaningful experience is evident in Don’s description of a room, ”When you open the door you never see a work desk but instead you see a chair or piece of art presented in a situation of repose”. The process has been to strip back all the items usually found in a hotel room and replace them with unexpected items not usually put together.

Just as important as what has been placed in the rooms is what hasn’t been placed there. For example, rather than having desks in all of the rooms, the boys opted for a console in some. Arranged as a challenge to not come back to your room and work.

Don’s set inspiration began with Nectar’s idea of an Australian shack and a response to Australia’s dry bush capital. It was interpreted as a textural experience that was achieved by using materials like unstained woods, clay rendered walls, natural fibre wallpapers, leather, mild steel, brass, linens and Berber weave carpets; as well as playing with light. The eternal mantra for this project was “no veneers” and it extends to the building itself. Wherever possible the process of construction and the architecture has been acknowledged.

To get the set just right they redesign the pieces that didn’t make them happy like taps, towel rails and brass tables. The thinking around these designs were again a study in feeling. For example, the unscreened wardrobes are designed in such a way as to encourage guests to unpack their bags and hang up their clothes so that it feels more like you are moving in, not just staying over.

Don’s favourite rooms are number 133 “for the journey down its long corridor, meeting up with a hung boucherouite rug, not knowing where the path leads. Then the right angle where you are presented with a bed and off it a sitting area. As you approach the window you get a view of the central atrium, with its forest of salvaged Dicksonia Antarctica tree ferns, that offers you an intimate look across the space of the internal hotel. Once there you notice that there is another door that leads into the bathroom which opens into a huge space with bath, twin head shower and a five metre benchtop. That for me is a beautiful room in terms of the surprising unfolding narrative that you get physically moving through the space.”

“The other room I really enjoy is 211. You are right on the nose cone of the building and you feel like you are floating above the view. As you walk in there is a dressing area with an artwork hanging on the wall. You can either go right into the bathroom that has structural columns inside the space or you go through to the bedroom which is a trapezoidal shape and again you have structural columns in the room. I like that in 211 you have a sense of structure in the building. This exposed structure playing against a beautifully restored wooden chair. These are the narratives and dialogues we wanted to create.”

Don’s latest contributions to Hotel Hotel is by way of the ‘Perfect Imperfect’ exhibition by Karen McCartney, Sharyn Cairns and Glen Proebstel in collaboration with Hotel Hotel.

The exhibition was born from the pages of, and launches, a new book of the same name by the trio, published by Murdoch Books. It brings together contemporary design with well- worn objects to explore the established aesthetic of wabi-sabi from a new standpoint where craftspeople, designers and artists are combining handmade processes with new technologies for making.

Don’s photography and collected objects will be exhibited alongside works by Jacqui Fink, Harriet Goodall, Nicholas Jones, John Wardle and many more.

The ‘Perfect Imperfect’ book and exhibition will launch at Nishi Gallery today (Wednesday April 27) at 6PM and run until Monday May 8. 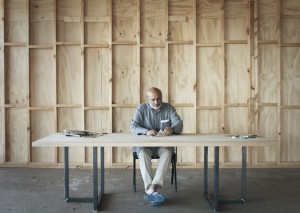